In response to COVID-19, ASI-managed facilities are currently closed and programs are being offered virtually. For the latest updates, visit ASI Now - View Post

Spring ASI elections and recruitment are your chance to get involved in ASI Student Government!

ASI elections are held annually in spring quarter and determine the student leadership for the following academic year. Elected representatives include the ASI president and the ASI Board of Directors.

The ASI president is the only elected at-large student leader at Cal Poly and serves as the official ASI representative to the university and the general public.

The ASI Board of Directors consists of 24 elected positions that serve as the official voice of Cal Poly students in regards to student advocacy efforts and ASI corporate activity.

ASI Student Government is comprised of both elected and appointed student positions. During ASI elections, the ASI president and Board of Directors are elected through a campuswide student vote. Students interested in appointed positions are required to apply, go through an interview process, and are then selected to serve.

Elected in the spring, the ASI president represents the general student body and acts as the official representative and host of ASI to university administration and the general public. The ASI president serves for the fiscal year and is responsible for providing input regarding corporate operations and student advocacy.

ASI Board of Directors

Serving as the official voice of Cal Poly students, the ASI Board of Directors is comprised of representatives from each academic college. These student-elected representatives establish policies and parameters for the affairs, properties, personnel, and operations of ASI, in addition to representing students at a campus, city, state, and federal level.

The ASI Executive Cabinet is comprised of members appointed by the ASI president and chief of staff who work with Executive Staff volunteers, Cal Poly students, ASI staff, and community members to carry out the president’s goals. Applications for cabinet positions including the chief of staff open during spring quarter.

Recruitment for the ASI chief of staff is currently closed.

Recruitment for the ASI Executive Cabinet is currently closed.

The University Union Advisory Board (UUAB) is comprised of one appointed student member from each academic college including the vice-chair, one ASI Board of Directors representative, and the ASI president or designee. UUAB representatives advise the university president and ASI executive director on policies, programs, and improvements related to ASI-managed facilities including the Julian A. McPhee University Union, Cal Poly Recreation Center, Cal Poly Sports Complex, Doerr Family Field, and Cal Poly P.

Results of the 2020–21 ASI Student Government election are now available! 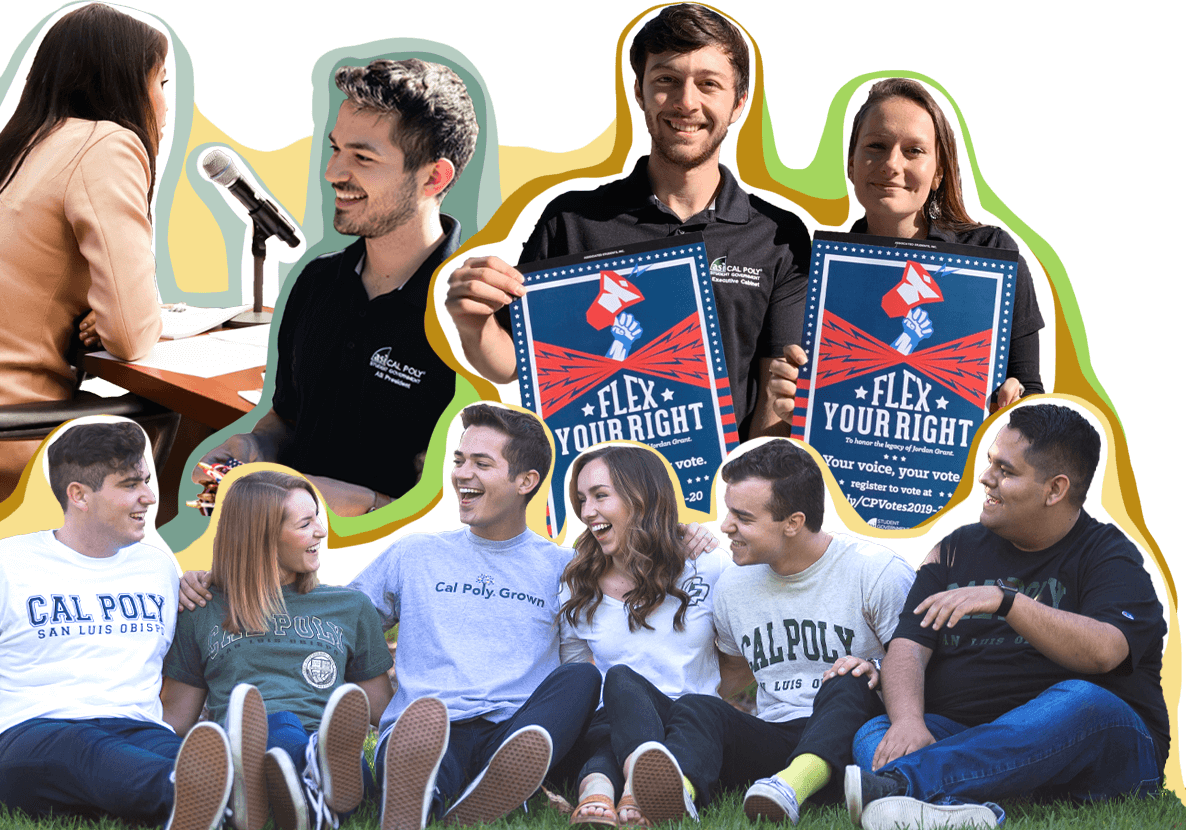 Our instant runoff method is a Single Transferable Vote (STV). With STV, candidates are automatically elected if they achieve a minimum number of votes called the quota. The quota is defined as (total number of formal votes) divided by (the number of candidates to be elected +1) or a minor variation of this. This formula ensures there are never more winners than vacancies.

The process of determining the winner is achieved in various counting rounds called counts. The first count finds all candidates who reach or exceed the quota from the number of first preferences received. Commonly one or more candidates receive more first preference votes than the quota. If the required number of vacancies is not filled in the first count, the excess of votes over quota is not wasted because the excess fraction of each vote for each winner is transferred to the remaining undecided candidate(s) according to the second preferences of those voters. This results in fractions of votes being transferred to the remaining candidates.

Next the candidate with the smallest number of votes, including transferred votes, is then excluded and, again so that no votes are wasted, all votes attached to the excluded candidate are transferred in full according to the voter’s preferences. The process then repeats with another count to find the next winner until the required number of vacancies is filled.

Students interested in playing an active role in Student Government are encouraged to either file as a write-in candidate for the ASI president or the Board of Directors, or apply for the ASI Executive Cabinet or University Union Advisory Board (UUAB) during spring quarter.

A write-in is a candidate in an election whose name does not appear on the ballot. Voters may vote for an individual by writing in the person’s name on the official ballot.
Write-in candidates must submit the required ASI elections paperwork to Student Government within 24 hours after the polls close.

Complete the ASI Board of Directors Write-In Candidate Packet

Board of Directors Responsibility Guide

Overview of ASI Officer and Board of Directors Roles

Board of Directors Write-in Candidate Packet