Home ASI Now ASI Blog INSIDE ASI: The Engine Behind Your Recreation Center

Pool cleaning used to be rudimentary, according to Roberto Espinoza, the Interim Coordinator of Facility Operations at Associated Students, Inc. (ASI). Years ago, the pool cleaning protocol for residential and local pools across America called for weekly visits from pool cleaners. They would come every Thursday or so and pour enough chlorine and chemicals into the pool to keep it usable for the week. That meant that on the day the pool cleaner came by, your pool was loaded with enough chemicals to keep it sanitary for the entire week — and by the time those chemicals have been diluted and ineffective the following week, the pool cleaner would come back and do it all over again.

That’s like taking all your multivitamins for the week on Monday and hoping those benefits would last for the next seven days.

Pool cleaning has come a long way from tossing a week’s worth of chemicals in all at once; the Recreation Center’s aquatics team makes sure of that.

Jump In. The Water’s Perfect

“Pools have personalities,” Espinoza says. “I can tell the quality [of water] by how it feels to the touch.” Espinoza oversees just about everything with a moving part, motor, pipe, or water at the Cal Poly Recreation Center — and a large part of that everything is the Lap and Leisure Pools that grace the facility’s pool deck.

At 600,000 and 150,000 gallons respectively, both the Lap and Leisure Pools are fervently curated by Espinoza and the maintenance team he leads. “Everything [about the pools] is by design; the color, the feel, the temperature,” Espinoza says.

Sitting at a lovely 81 degrees, the facility’s pools are maintained by the minute. Both aquatics facilities are orchestrated by a large, industrial room that would stagger most novice pool cleaners. Equipped with six large water filters, highways of pipes, several computers, and a pair of motors, these systems ensure that the water is ideal for Recreation Center members — every hour of every day.

In fact, the water at the Recreation Center’s pool is so hospitable that most viruses, bacteria, and fungi are dead in the water. Every gallon of pool water is filtered four times a day and chemically balanced every four minutes.

Concurrent with the Cal Poly ethos — Learn by Doing — ASI maintenance staff has learned how to work on every piece of equipment you see and use at the Recreation Center. By attending special training programs, rigorously studying gym equipment, and collecting trade secrets, the staff has built a repair Rolodex that allows for quick, in-house repairs. No outside contractors, vendors, or month-long repair turnarounds. In fact, most things are repaired and returned to the floor that day. When a new piece of equipment lands at the facility, the only people more excited to get their hands on it than members is the maintenance team. 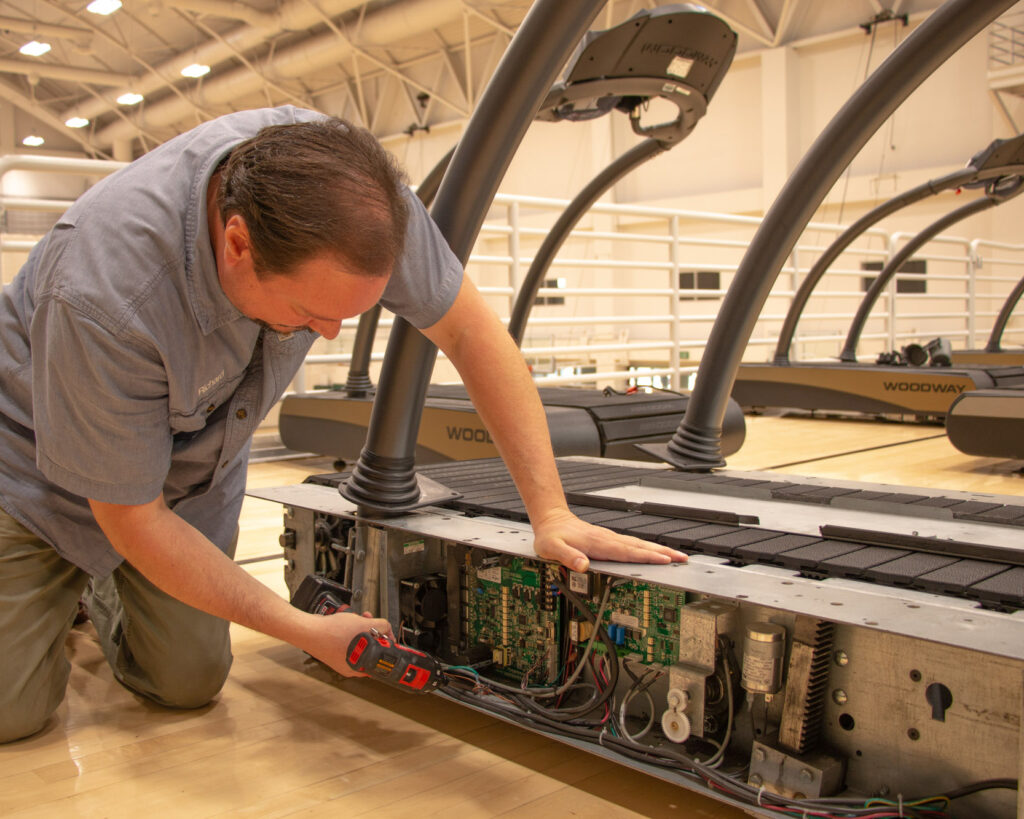 Yet the story of the maintenance team’s mastery cannot be told without mentioning stationary bikes. Most stationary bikes at the Recreation Center don’t seem to tell much of a story. It’s tough to know what a well-traveled, storied piece of equipment even looks like when ASI’s Building Services team makes sure they look unblemished, and the maintenance team guarantees they ride like new.

“There are stationary bikes at the Recreation Center that have over 130,000 miles on them,” Espinoza says. “You would never know.” After years of meticulous care, Roberto’s team and Recreation Center staff have taken the stationary bikes to reaches only traveled by motor vehicles. But making sure a piece of exercise equipment lives to see 130,000 miles starts way before it gets brought into the building. For the facility’s KEISER bikes — used during the ever-popular Breakaway cycling classes — that journey started at a Los Angeles convention center.

“Hey, this class is quiet,” said Eric Alexander, ASI’s Assistant Coordinator of Fitness Programs. “I can actually hear the instructor.” Alexander and Espinoza were attending an educational lesson for a stationary bike called the “M3i” manufactured by KEISER; they were at the International Health, Racquet & Sportsclub Association’s annual conference in Los Angeles, CA. The M3i bike used Kevlar belts — like in your car — to facilitate its movement instead of chains. That meant it was considerably quieter than other bikes. A quiet bike meant that the class’s music could afford to be less than deafening and the instructor could be heard. We could use that back at the Recreation Center, they thought.

When Espinoza and Alexander visited the KEISER booth at the convention’s show floor and inspected its construction, Espinoza gave it the lookover that only the sort of person who might have to fix it could. He was surprised. The bike had maybe a dozen parts; other “premium” offerings contained upwards of 80. The turnaround time for 90% of repairs at the Recreation Center is under 24 hours, Espinoza assured, so when he saw how few parts were involved in the M3i KEISER bike’s construction, he was excited about what that meant for his repair team.

After spending some time at the booth, both Espinoza and Alexander were noticed by a KEISER representative for their Cal Poly gear.

The representative was a Cal Poly alum excited to see fellow Mustangs in the wild. Now an engineer for KEISER, they were a Cal Poly student before the Recreation Center was built. How could Espinoza and Alexander say no to KEISER?

Now, dozens of quiet and reliable M3i KEISER bikes live at the Recreation Center. They can be found wherever Breakaway cycling classes are being taught, and, according to people who have attended the class, You haven’t tried a stationary bike until you’ve hopped onto one of the Breakway bikes (the M3i). 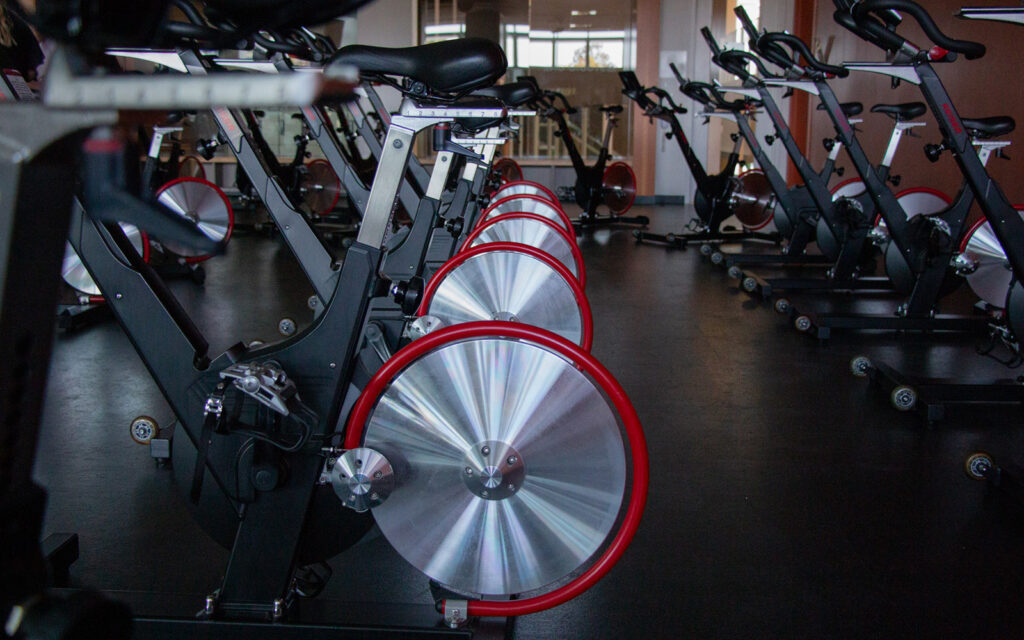 All Day Every Day

That Recreation Center’s Building Services team is the eyes and ears of the facility. Here all hours of the day, building services keep 20,000 square feet of exercise area pristine.

Brian Patty, who leads the team, is “the eyes and ears” of all ASI-managed facilities. His team takes pride in maintaining a more-than-stellar standard of cleanliness and is always looking for ways to up their game. In the past, the building services and facilities teams would tour other parts of campus just to make sure that the sanitary standards and conditions at the Recreation Center were indisputably high. Today, that has led to tireless sanitization efforts, industrial-level cleaning technology, 13 hospital-grade HVAC units — the size of tiny houses — and zero recirculated air inside the facility. 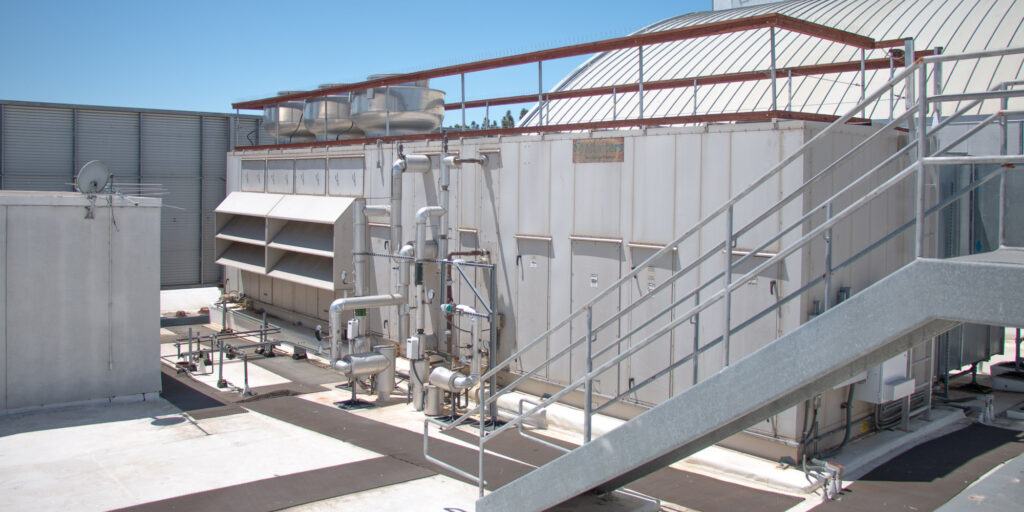 The Building Services crew takes pride in their craft and their facility. “They truly are givers,” says Daren Connor, ASI’s Assistant Director of Facility Operations for the University Union and Building Services supervisor. “They’re a great team with an amazing attitude, and they are why [the Recreation Center] runs as well as it does.”

Stewards of the Recreation Center

For all of the high-tech solutions, superb standards, and hard work that goes into keeping your Recreation Center running, the doors would not open without its true stewards, the student staff.

From Membership Services staff that helm the front desk to Facility Supervisors that patrol every room, space, and beyond, the facility’s student staff are there from open to close. 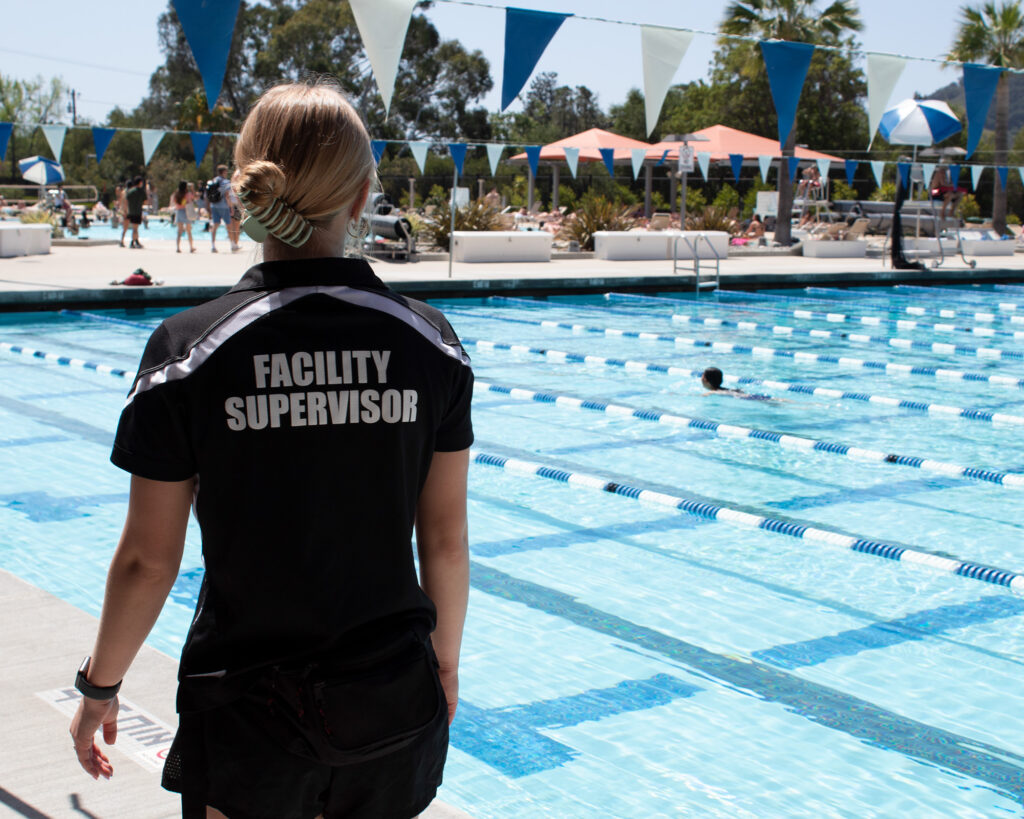 They are the reason that all your favorite piece of equipment and weights will always be in the right place when the facility opens; they are the first points of contact for repairs, issues, or lost items; they also know how to effectively launder a bean bag, of which the Recreation Center’s are washed twice a week. Perhaps most importantly, Facility Supervisors are your first responders. Having been trained and drilled on first aid, evacuation routes, and achieving CPR/AED certification, they are prepared to respond to sprains, strains, bleeding, and even seizures. “In terms of training, we are constantly brushing up on our knowledge,” Doshiro says. “We have a safety topic to discuss at every one of our weekly meetings.” Those safety topics could hinge on a recent incident, how to administer certain types of first aid, or reiterating CPR standards. Some of their training is even orchestrated live, without notice, like their “SERA” training.

“SERA” stands for Student Emergency Response Assessment, and it means on-the-job training. “They have no idea it’s happening,” says Mary Kate Harrington, a former Student Manager at the Recreational Center who oversaw Facility Supervisors. “They walk in on shift, I call them upstairs over [walkie talkie], and give them a piece of paper that says you’re responding to a seizure.” Next, they see Doshiro acting out a seizure on the floor. Having just gotten on shift, they are tasked with using their resources and responding appropriately. That happens twice a year for every Facility Supervisor.

On any given day, thousands of students, staff, faculty, and alumni come in and out of the Recreation Center — and every time they do, ASI staff work around the clock to keep the building up to the standards they have set for their members. They do that in hopes that the Recreation Center can be a hub for anyone from in the Cal Poly community’s fitness and wellness journey, or at least a place to relax and use the Wi-Fi.

Espinoza hopes that the facility remains a familiar place to remember long after its members have turned their tassels.

Espinoza was walking around the edges of the Lap Pool when a member swam up to him for a friendly hello. “I just enjoy seeing people use the facilities,” Espinoza said. “I don’t need a thank you [for maintaining them]; really, a smile is good for me.” Roberto got back to patrolling the facility, as he always does. He knelt by the pool’s edge and brushed the water. He could decipher a pool’s quirks that way — by how it felt on his hand.

*At the time of publication, Tatuko Doshiro is now in a new position with the Cal Poly Corporation.